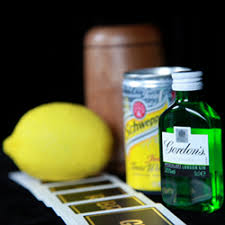 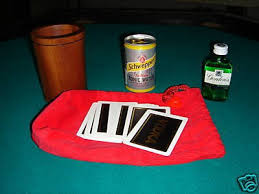 Manufactured by Colin Rose of Five of Hearts Magic

A Beautiful Hand Turned Wooden Cup is seen upside down on the Table. The Magician explains that underneath there is a prediction. He produces nine playing cards with names of various drinks written on them… Vodka, Rum, Whiskey, Port etc… A Spectator is then asked to mix up the cards behind his back and then lay them onto the table in front of him… he turns over a card which says GIN… The Magician then lifts the cup to reveal a miniature bottle of GIN! He then asks what goes with GIN… The spectator says TONIC… and again from under the cup appears a small can of TONIC! Finally the cup is lifted for the third time only to reveal a LEMON!

This is a fabulous routine, immediate registration with the Audience and perfect for Close up and Cabaret… particularly if you are working Hotels and Bars!

Now for the PLUS bit!

This product has now undergone some further development as a result The Wooden Cup is now ‘chopped’…Gin & Tonic was always a fabulous routine but it just got better!! Now you can use Colin’s beautiful turned Cup as a regular Chop Cup …so if you wish to extend the Gin & Tonic Routine (as known) you can, equally if you have an existing Chop Cup Routine that you like to use now you can do both..One Cup  with Two Routines !!